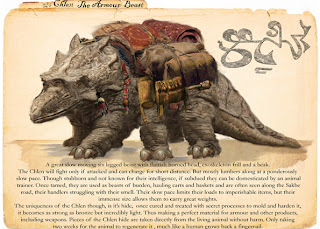 Art by Paul Allan Ballard
Posted by phf at 8:47 PM No comments:

Until further notice we will be no longer be taking Special Orders of our old Eureka ranges.

Email ThisBlogThis!Share to TwitterShare to FacebookShare to Pinterest
Labels: News

Remember Remember the Fifth of November

After long delay, the Shén are finally going into production. For those of you unfamiliar with Tékumel, the Shén are reptilian aliens that followed humans to Tékumel. They live in the hot South near the equator – and by "Hot" I mean Hotter as Tsolyánu is hot as it is! Many Shén serve as mercenaries in the armies of Tsolyánu, Salarvyá, Mu'ugalavyá, Yán Kór and Livyánu, the five great empires that rule this hemisphere of Tékumel.

Note that this applies to only slightly more than half of our Shén figures. This is because the master figures share a mold with Eureka's figures so I don't have access to the Master mold. I have master figures but they suffer from the same difference in metal type that plagued the Ahoggyá. These will require low temperature molds before we can begin production. This really sucks, but there is little we can do at this point. Little did we know what path things would take when the figures were first made!

Anyway, going into production are:

NOT YET AVAILABLE - Waiting for low temp molding and/or accessories:

Tékumel Club members will of course benefit from their usual club discount.

The intent is to due the remainder of the Shén next, and assuming no major hiccups with that then moving on to the Ahoggyá.

We will be offering additional shield types for the Shén as well, to match other legions in mercenary service throughout the Five Empires.

For our Summer Catalogue please check my previous blog post.

Or email me at the address below, and I will send you the PDF directly.

Thanks you all for your interest and support. I hope you enjoy our figures.

Howard Fielding
The Tékumel Project
green27@sympatico.ca
Posted by phf at 11:28 AM No comments:

The 2011 Summer Catalogue is here! 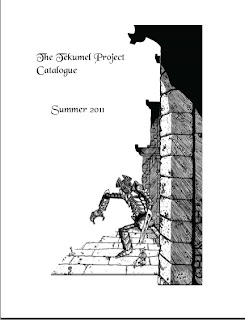 
And also in the files section of the Tekumel yahoogroup.


And, if that doesn't work either, you can email me (at green27 -AT- sympatico -DOT- ca) and I would be happy to email you a copy.


May be NSFW, as it contains images of nude miniatures(!)

Email ThisBlogThis!Share to TwitterShare to FacebookShare to Pinterest
Labels: Catalogue

Canada Post has locked out it's striking Union, so we are shut down for a bit - unless anyone wants to use a courier service(?)

Castings arrived Yesterday! They look sweet! I am putting together a proper PDF catalog. In the meantime, all but the columns are listed in the pages to the right.

The columns are technically part of a larger set and not certain about how to sell them - or if to sell them now, or wait - or what the pricing should be...

Castings on their way...

...well they will be next week. The following sets have been cast up and should be delivered via courier next week:

TEK-80 The Clan of the Striding Incantation - 50 sets ordered - to be found in the Palace of the Realm to the right.

TEK-40 The Sacrifice - 50 sets ordered - look for these in the Palace of the Priesthoods of the Gods.

TEK-100 Princess Vrísa Vishétru of Saá Allaqi - 50 figures ordered - she can be found in the Heroes of the Age section, also to the right.

I'll let everyone know when they are here and maybe even get some pictures up! :-)

And as a reminder, the Hlaka range is all available. Look for our furred flying friends in the Palace of Foreign Lands:

The Thúnru'u (the Eater of Eyes)

Just updated the Underworld page (to the right) with the picture.
Posted by phf at 7:24 PM No comments:

Email ThisBlogThis!Share to TwitterShare to FacebookShare to Pinterest
Labels: Eater of Eyes, Thúnru'u

Added the original Empire of the Petal Throne art, by Professor Barker himself, and on which The Sacrifice vignette is based, to The Palace of the Priesthoods of the Gods page.
Posted by phf at 4:25 PM No comments:

I've added the Hlutrgu and the Qol - at least those Qol currently available. They are under the Inimical Races and Underworld sections, respectively.

Also expanded the How To Order section. I see this as becoming a sort of FAQ section over time, so if you have any questions or suggestions please email me.

All the sections are going to be expanded with background and pictures. Eventually there will be painting guides and perhaps articles about the subjects - maybe scenarios for games.

After hearing a report of this blog raising flags with Google Chrome, I had a look through all the code I have access to and cannot find anything odd. The only thing new was the Cluster Maps so I deleted it for the time being.

Email ThisBlogThis!Share to TwitterShare to FacebookShare to Pinterest
Labels: News

Quick! Check the cluster map - lower righthand column! I just added it yesterday and it's currently showing a single visitor - me!

So now you know where this stuff comes from! :-)

(If you are reading this after May 2nd EST then my dot is one of those at the eastern end of Lake Ontario - Kingston, ON to be precise!)

I have posted some of our pending releases to the catalog sections. These releases have been master molded and production molds are pending.

In the Palace of the Realm is the Clan of the Striding Incantation - the Puppet Master vignette, a seven figure set.

In the Palace of the Priesthoods of the Gods is the Sacrifice vignette - based upon art from the original Empire of the Petal Throne game.

After much delay the long-awaited re-design is underway. Wear your hard hats and safety shoes and watch out for falling bricks!

I finally figured out how to get the same look as the Tékumel Project blog!

I'm a happy camper now! :-) The templates Blogger had available were pretty lame and I was haveing a hell of a time getting my posts to show up like I wanted them to. It was very frustrating to have to fight with the formatting all the time.

I'm hoping this change will make posting easier. This is not to say that I don't have to do a major overhaul of how information is presented - oh no!